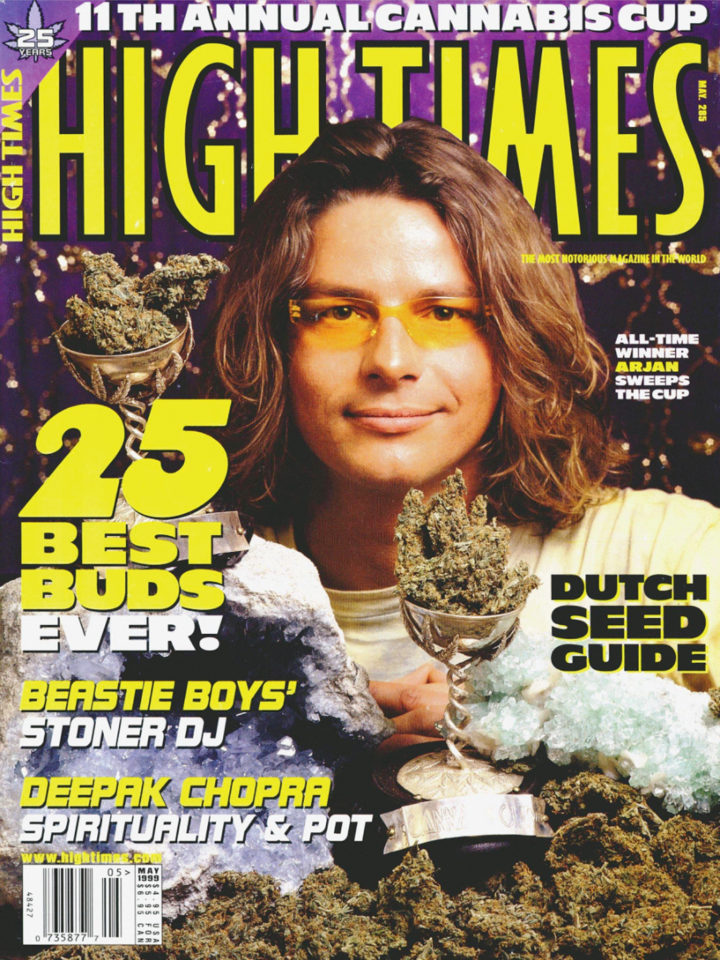 Be it the hills of South America or the rivers of Africa, Roskam has spent much of his life hunting the best genetics in the world since he opened his first Amsterdam, Netherlands coffeeshop in 1992. This would lead to the breeding work that ended up taking home a ton of trophies.

Roskam first found his way onto the Cannabis Cup podium in 1993, placing second with Silver Pearl and then again placing second for Citral Skunk in 1994. But 1995 would be the year he found his way to the podium with White Widow, kicking off the legend of a strain that carries weight to this day, even if we never see it anymore.

After another runner-up finish in 1997, the era of Super Silver Haze would kick off with its 1998 victory. The next year, in 1999, it would be the first strain to win back-to-back Cannabis Cups. Things went well the next few years, with another win in 2003 for Hawaiian Snow and Arjan’s Ultra Haze climbing to the top in second place in 2005 before winning in 2006.

Green House Seed Company’s Super Lemon Haze went on to back-to-back Cannabis Cup wins in 2008 and 2009. It was arguably the strain Americans were the most exposed to from Green House through the 2010s, as there were some exceptional phenotypes going around Northern California. The Village, half of Symbiotic Genetics, placed third in the first legal Cannabis Cup in California with Super Lemon Haze in May 2018. Most of the Cannabis Cup podiums would see Green House on them somewhere until Dutch officials started to crack down on the competition and Europe’s weed enthusiasm began to move toward Barcelona, Spain, or even Germany, where they are now legally importing medical cannabis from Canada. While Amsterdam is the legendary homeland of cannabis genetics, its glory is a bit more diluted now than in years past.

Thankfully for Amsterdam, Roskam—known as the “king of cannabis”—spent the majority of his life helping build up local lore since he opened his first coffeeshop at age 21. But the world closing due to the COVID-19 pandemic, just one month before his 50th birthday, would throw a wrench in his adventures.

However, when we met with Roskam at Hall of Flowers in Palm Springs, California, the world was feeling more open than ever—and Roskam was taking full advantage of that fact as he bounced around the globe in the months leading up to the California event.

“We are super, super busy. We just made a new movie in Africa,” Roskam told High Times.

As a part of the Strain Hunters cannabis documentary series, Roskam and his team traveled roughly 100 miles by boat on an African river over seven days last summer.

“The last six weeks, I’ve been doing shows in Barcelona, then we did Cape Town, then we did Rome, and we did Bologna, then we went to the 420 Golden Cup in Colombia in Santa Marta.”

We asked Roskam if the pandemic afforded him time to go back into his genetics collection and search for new winners and breeding stock. He explained his team was still able to “hunt 100,000 seeds at a time” at their operation in the Democratic Republic of Congo. He also said there was plenty of work to be done at home too, and the pandemic was the perfect chance to reimagine Green House coffeeshops.

“The moment COVID hit Holland, I’m talking about March or February 2020, we all sat in the office and couldn’t go nowhere. We knew this [pandemic] was gonna take one to two years,” Roskam said. “We did a remodel of our coffeeshops. We have five in Amsterdam, we had four and we bought another one. So we decided to remodel all the Green House coffeeshops. We took six weeks for each coffeeshop, and they look amazing now.”

With no coffeeshops to run, the coffeeshop staff wanted to help with the rebuild. The bouncer became one of the painters. One of the guys had some plastering experience. They worked 10-hour days going from shop to shop. Much of the time, it was a full rebuild, even including new walls to go with the updated floors, lights, and marble.

“We’re going to use some of our genetics with their genetics,” Roskam said. “So we’re looking at crossing the famous Exodus Cheese and some other things that we can’t speak about right now.”

Christopher Lynch, founder of Compound Genetics, told High Times he is excited to work with Roskam.

“Our connection with Arjan is in a league of its own,” Lynch said. “His knowledge of cannabis, worldwide experiences with the plant, and professional demeanor is truly impressive. I’m beyond excited for the Green House Seed Co. x Compound Genetics collaboration.”

Lynch and his company have played a big role in determining the exciting weed trends in recent years. We asked Roskam how Holland responded to the wave of dessert weed that first started coming out of Northern California just over a decade ago as Cookies started to take off.

“It’s still only 15% of everything [in Holland],” Roskam said. “Because people cannot pay it. And 15% can pay the prices of $18 to $30 for a gram. So most of the people buy the normal stuff. And in Europe, it’s kind of a shame, because the American imports are just much more expensive. Of course, that will change in the future.”

Roskam has had plenty of his own “hype” strains over the years. Two new flavors he hopes his fans will add to the list are Fullgas and Lemon Orange. On top of the 12 strains he’d already launched in 2022 by the time we chatted, he also had three new Banana strains that would be dropping in the weeks to follow.

Roskam noted that before the last four years that he has spent bouncing around Canada and Africa, he’s spent another eight in the bush. Now he’s taking a little bit of a pause to focus on everything he’s collected over the years.

“We’re going full gas on new genetics,” Roskam said of their efforts. “There are four places in the world where we work besides the Congo. We work in Columbia, Denmark, Spain, and America. So we have a lot of opportunities to make new genetics, and we think Green House Seed Company, with all our knowledge and experience and guys around us, we can be very soon [a] leader again in the seed market, you know?”

We asked if it ever felt like there were just more places for people to spend their money over the last decade, as opposed to Green House falling off the mountaintop.

“Sure, which is great for the industry no?” Roskam replied. “More people makes everyone more happy because there are more varieties.”

As for hype surrounding strains, we asked Roskam if he has ever had concerns about everyone growing the same types of cannabis because of their popularity, which in turn narrows down the flavors available in the marketplace. He laughed and saw the premise as a very American problem. Roskam believes that there are a lot of great strains in America, but said in the rest of the world, there are even greater strains.

He said most American genetics come from four breeding lines.

As he spent the nights in Palm Springs socializing with some of the most influential people in cannabis, many of them agreed with his opinion of the Hawaiian Snow or at least agreed that it is a contender in the conversation.

“If you and your wife go out to the restaurant with friends, you get all the food and you put it out in the middle of the table. Why would you narrow yourself down to one variety? Do you eat the same food every day? Do you drink the same wine? Some people do, but these are not people that enjoy life,” Roskam stressed.

The conversation then moved to how many genetic lines Green House is able to work on at once. Given Green House’s multi-decade success, Roskam said it’s a lot. He argues that thanks to a trick developed in-house over the years, he’s able to understand a lot about a plant’s expression over the course of two months. He boasts that he can even pick up on traits passed down from parents and grandparents.

“We like to come with new things, strange tastes, and bring new genetics to the world,” Roskam said.

One of the funniest things about American breeding for the Green House team is how many people have used Super Lemon Haze over the years in their own work. He notes that some breeders are openly selling it now, which they really appreciate. Roskam wouldn’t mention any names but shared that they’re using Green House genetics, and he plans to use their genetics in the future.

“And this is great. Why not, you know?” Roskam said. “The Lemon Orange, we used a seed from Crockett [Family Farms] with my Super Lemon in it,” Roskam said. “Cloud Walker, we used our Punta Roja, which we scouted in our movie with Mendobreath. So yeah, we are mixing these days, but we are putting the pure genes in to make sure it’s strong. I think that’s really important.”

He argued that you’re less likely to see the plants impacted by diseases with sturdier genetics. He also contends you see less powdery mildew when the plants are properly cared for.

When asked what kind of technology has made his life the easiest over the last decade, he shook his head, noting that it wasn’t really a technology issue once you got down to what works.

“Listen, from the bottom of my heart, you can only do a really great job with huge fields,” he replied. “Nobody has that in America because everybody has an investor, and the investor wants to see his return by profiting on every square foot.”

Roskam, on the other hand, is in a very different situation. Green House’s Africa setup allows them to pop 20,000 to 40,000 seeds at a time on the quest for true genetic outliers.

“We have 40 glasshouses across seven valleys,” Roskam said. “And in those seven valleys, we flower out our phenos that we hunt. That creates the possibilities we have that nobody else does.

In agriculture purposes, it’s scientifically known that you need 10,000 plants to find one. Nobody can do that in America. That’s why there’s a lot of public companies. That’s the difference between Green House Seed Company and others.”

As for how stable American seed companies are compared to their European peers, it depends on how you look at it. Roskam said, of course, some Dutch lines are very strong after 30 years of work.

“And don’t forget we are Dutch farmers. Seventy percent of all the world’s agricultural seeds come from Holland,” Roskam said. “The whole glasshouse industry comes from Holland. We are farmers. We are simple farmers. But we are very good farmers.”

He conceded there are many more possibilities in America because cannabis is legal in many states.

“But still here in Holland, even though we are totally illegal, we have big places in Africa and Morocco where you are able to do a very, very great job,” he said.

This article appears in the August 2022 issue of High Times. Subscribe here.

The post The Reigning King of Cannabis appeared first on High Times.