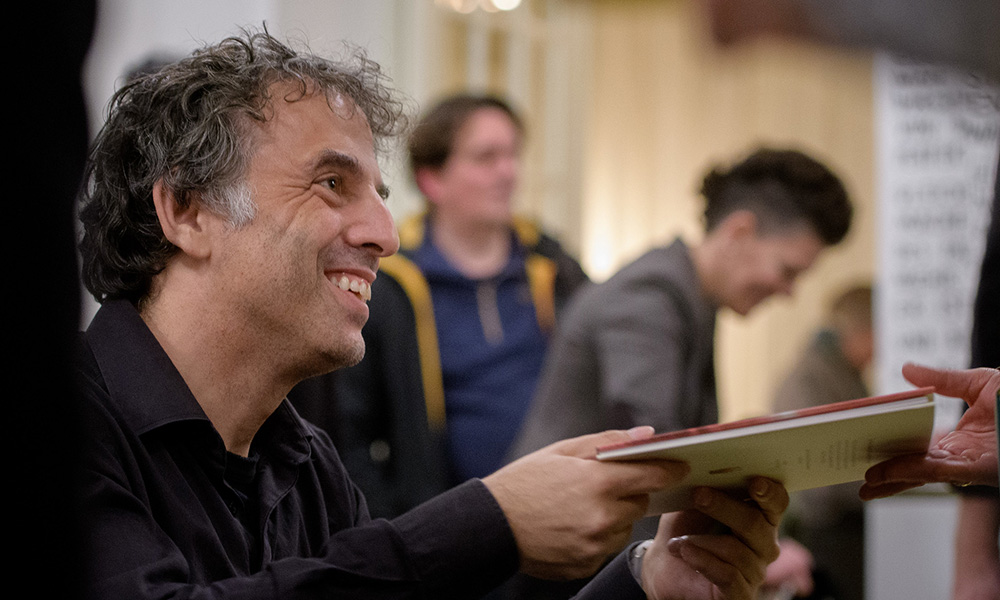 Dotted with wry humor and touched with tender, often heartbreaking revelations about human relationships, Etgar Keret’s short stories use cannabis as a bridge to expose intimacy. In his newest work of short fiction, “Fly Already,” the award-winning Israeli novelist and filmmaker includes two stories where a joint drives the narrative and the search for authentic human connection. Keret’s concise writing style flows like poetry, like the aromatic steam lifting from a coffee cup or the smoke drifting off a joint during the first hit of the day.

“The
first hit is the one that colors your world,” Keret writes in the story
Pineapple Crush.

“Save it for the
evening — and any piece of trash flickering across your TV screen will be
riveting. Puff it at midday, before you get on your bike, and the world around
you will feel like one big adventure. Smoke it as soon as you wake up in the morning,
before your coffee, and it’ll give you the energy to crawl out of bed or dive
back in for another few hours of sleep. The first hit of the day is like a
childhood friend, a first love, a commercial for life. But it’s different from
life itself, which is something that, if I could have, I would have returned to
the store ages ago. In the commercial it’s made-to-order, all-inclusive,
finger-licking, carefree living. After that first one, more hits will come
along to help you soften reality and make the day more tolerable, but they
won’t feel the same.”

Keret has appeared in the New Yorker, New York Times, The Wall Street Journal and Paris Review and is a frequent contributor to public radio’s “This American Life.” It was through his strong connection with his father Efraim Keret — who survived the Holocaust as a teenager by living in a hole in the ground with his family members for nearly two years — that he learned his first skills as a storyteller. A theme of his father’s storytelling, parallel planes of reality, appear often in Keret’s own work, which frequently includes relationships between parents and children, siblings or married couples combined within fantastical elements such as magicians or goldfish able to grant wishes.

“As
a writer who writes a lot of very short fiction, I write about moments of
intimacy and moments of authenticity,” Keret says over a WhatsApp call from his
home in Tel Aviv. “All these kind of moments that are not driven by the force
of inertia but are, in a sense, a moment of revelation.”

His
stories, he explains, involve people smoking pot in the same way he would
describe someone drinking coffee or smoking a cigarette.

“There
is something about pot smoking, that for me, it’s something that becomes a
segue to have a conversation that leads to exposing intimacy or weakness or creating
some kind of bond between people.”

Through his father, and his older brother Nimrod Keret — who was a co-founder of Israel’s political party dedicated to marijuana legalization, Keret wrote about cannabis for the first time within the Lives section of the New York Times. While Israel is world-renowned for its cannabis research and medical marijuana programs and there is a relatively relaxed attitude towards cannabis use, marijuana remains an illegal substance in the country.

“I
wrote a story about how me and my brother go to my father to convince him to
vote for the legalize marijuana party,” Keret says. “Something about the piece
was that my father, who was a man with great integrity, he said I would feel
really bad if I did not support [the legalize marijuana party] because my son
is one of its founders but, on the other hand, a lot of people told me that pot
is really, really bad and I never smoked any so I can’t contradict that so I
don’t know what to do.”

To resolve this, the brothers smoked pot with their father, who was in his 70s at the time.

“After
smoking pot he said, ‘To be honest, it’s not half as good as whiskey, but to
make it illegal is pure stupidity,’” Keret says.

Keret, who is now 52, wrote his first story at 19 following the suicide of a friend during their compulsory service in the Israeli Army. His brother Nimrod was the first person to read his work, a humorous tale described in Keret’s 2006 memoir “The Seven Good Years,” and is someone he has always admired. But, despite his brother’s ties to legalizing marijuana, Keret says he found cannabis through friends.

“I think that I’m kind of a goody two-shoes, kind of a suburb boy,” he says. “I was born in Ramat Gan, which is not far from Tel Aviv physically but it’s a little bit far mentally. It’s a little bit like a New Jersey to New York kind of thing. So I grew up in an environment where basically [people said that] people who smoke pot later use heroin and rape their sisters, you know? It was really what they taught me in school and being a good boy, if they would tell me about somebody who smoked pot, I would not get close to this guy because I knew at night that he was going to become the Incredible Hulk or Dracula.”

Keret’s
compulsory service in the Israeli Army continued until he was 21 and, shortly
thereafter, he moved to Tel Aviv and got his start as an artist.

“I
published my first book when I was 24,” he says. “I was introduced to many
filmmakers, I started teaching in film school when I was about 25, so I kind of
met more and more people that smoked cannabis.”

In
the telling of the first time he smoked marijuana — an account he explained in
which he could be “really honest” because as he said this article would appear
in the U.S. where he doesn’t know many people — sounds a bit like one of his
short stories. The first time Keret tried cannabis he was in his early 20s and
at a distant friend’s house.

“Right next to me sat a beautiful and charming girl that I knew was way out of my league, you know? And she was smoking and for me, being kind of a guy who thinks about the angles, I thought to myself, ‘If I smoke, I’ll take the joint from her, so my fingers will touch her fingers — it will be even kind of allowed — and she smokes and after that I smoke, so I thought to myself you know, ‘This is as close as I’m going to get to kissing her so I might as well go for it.’”

And, as it so happens, Keret — who writes in Hebrew, has been translated into 40 different languages and has recently won both the Sapir Prize, Israel’s most prestigious literary award, as well as an award from the Jewish Book Council for “Fly Away” — has some other critical moments of his career connected to marijuana. Keret smoked cannabis during his first reading in Israel, an experience that he conveys did not go well because he couldn’t remember anything. He also smoked in front of an audience during the Happy Ending reading and music series in New York City, where the challenge for readers was to take a risk and to do something onstage that they’ve never done before. In his performance for the series, which ran from 2003-2016, Keret smoked a joint on stage at Joe’s Pub. The act got the series tossed from the venue for violating the city’s smoking laws.

The
impetus of Keret’s most recent story collection was a car crash he experienced
while on a book tour in the U.S. After suffering from his injuries sustained in
that crash, Keret became a medical marijuana patient in Israel.

As he told the New York Times, the accident was a moment which he summed up his impending death: “All in all what is happening now, my death, is just a glitch at the edge of the galaxy.”

The “Glitch at the End of the Galaxy” was then the “Fly Away” collection’s original title, and the name of the book in Hebrew.  In “Fly Away,” another story title was also changed: the story named “One Gram Short” in English was called the “Golden Heart Flower” in Hebrew.

The
story involves a guy trying to secure a joint to impress a girl. As Keret
describes it, “One Gram Short” is “the story of an Israeli hipster who kind of
half pretends to himself that he’s living in Williamsburg, Brooklyn. There’s no
Middle East, there’s no racism in this country, there’s no Palestinian problems,
nothing. But on his quest of getting a bud so he can hit on a girl, he’s
dragged to a place where he cannot deny anymore.”

“What
you call a bud in English, we call a flower,” he says. “And there is a fairy
tale, which they always teach you in elementary school, which is about a child
who goes on a quest to find the Golden Heart Flower. The term ‘flower’ in
Hebrew is almost the standard. You wouldn’t say to someone give me a gram or
give me a little, you’d say give me flower. And the funny thing about it is
because flower is such a common word…”

Keret
says there is even a popular pop song that includes lyrics about a couple going
through a breakup, and one says, “If you leave, please leave me flower.”

“Any
young person who lives in Tel Aviv really sees it as someone who breaks up with
his girlfriend and says, ‘Don’t take all the pot with you,’” he says.

As
a writer in Hebrew, Keret works with an ancient language, one which he explains
has gaps, but also — much like the language around cannabis culture — allows
writers to invent new words.

“I
have a term for if you smoke a joint and there is very little left, and you
kind of saved it, but it’s only a couple of puffs — I call it bubs,” Keret
says. “That’s the name of a character from ‘The Wire.’ He was a junky and what
I remember from him was always this kind of desperate urge to smoke. With a bubs,
it’s kind of humiliating to smoke it because it’s so little and with tobacco.
So when I smoke it, I feel like more like junky. Because usually I’d say, ‘Eh,
nothing is left so I’m not going to smoke it.’ So when I smoke it, I say, ‘OK,
give me the bubs, which means that I admit my junkieness.’”

But
when it comes to inspiration, Keret says there have only been a few instances
in which he wrote high.

“This
is something that usually doesn’t happen because I’m usually a very stressed
and neurotic person, but when I smoke I relax,” he says. “I kind of deteriorate
into writing positions. I write when nothing else works. After chewing my nails
and having a nervous breakdown and taking two Advils, I say, ‘Oh fuck, OK I’ll
write something.’”

Keret
says that cannabis, perhaps, is too much fun to help with his creative process.

“The idea of having fun and writing, it doesn’t go well together because if I smoke a joint or if I have sex or if I eat a good cake then I wouldn’t go and write because everything is OK now.”

TELL US, does your favorite author write about cannabis?