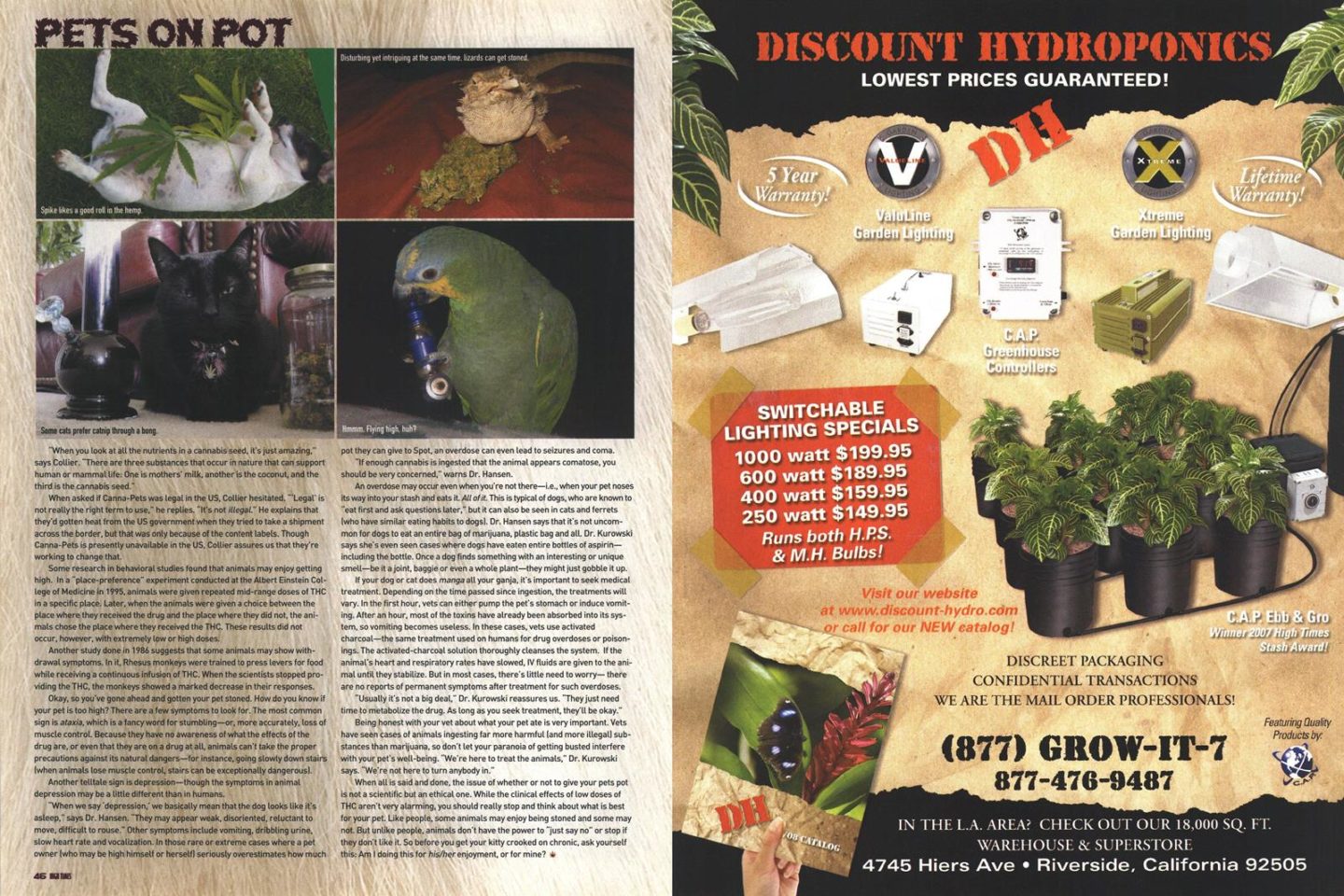 You’ve heard it before. Hell, you might’ve even been the one who said it—at a party, or when you were bored with some friends, or maybe when it was just you and your pet and you didn’t want to smoke alone. Whether it’s a dog, a cat, a hamster or a long-haired chinchilla, the fact is that people seem to like the idea of getting animals high. And why not? It’s not a malicious act—most times it comes from kind intentions: wanting to share with your furry (or scaly, or feathery) friend that which gives you such great pleasure.

But maybe giving reefer to Rover isn’t as good an idea as you think. Before you presume to know or dismiss the effects of pot on your pet, ask yourself these questions: Which stoner symptoms transfer over from man to beast? Do you know what to do if your dog eats an entire baggie of marijuana? And what of the ethical responsibility of owning and caring for another living being?

To understand the effects of THC on animals, we first must understand its effects on humans. THC works by attaching itself to specific receptors in the brain, which exist specifically to receive cannabinoids. The body naturally produces its own cannabinoids (called endocannabinoids) at specific times, which scientists suspect help to regulate pain relief and/or memory. Since THC and endocannabinoids share almost the same molecular structure, they can both connect to cannabinoid receptors, and thus both produce a “high” effect. Most living things possess cannabinoid receptors—including invertebrates. This is important for two reasons: First, it means these receptors have survived at least 500 million years of evolution (dating back to the time when vertebrates and invertebrates split), implying that the function of these cannabinoids is pretty damn important; and second, it means that most everything alive can get stoned—even something as simple as a slug.

But just because something can get stoned doesn’t necessarily mean it should. Dr. Steven Hansen, manager of the ASPCA’s Animal Poison Control Center, equates smoking up your pet to smoking up a toddler. “A toddler, like an animal, also does not know what’s going on. That, along with their low body weight, makes them more susceptible to the effects than an adult making a decision on their own.”

Because of animals’ lower body weight, a human-sized dose of THC will have a far more potent effect on them. They aren’t used to being stoned and can’t cope with it the way experienced humans can. When dealing with animals, a little smoke goes a long way. This is especially true of tiny pets such as hamsters or birds. In fact, smoke can be exceptionally harmful to birds, whose respiratory systems are designed differently for flight.

“In humans and mammals, we intake one breath and exhale that full breath,” explains Dr. Amy Kurowski, a veterinarian at the St. Marks Veterinary Hospital in New York City, “whereas in birds, they inhale a breath, and that breath stays in their system for several more breaths. So, if you’re smoking marijuana in a room with a bird, their exposure is actually greater than mammals.”

While birds may not be heavy smokers, they do have an affinity for hemp/cannabis seeds (as many of you outdoor growers are probably already aware). It’s well known among bird fanciers that hemp seeds are not only exceedingly nutritious for birds, but also make their plumage brighter and more colorful. Many bird-lovers’ blogs actually report that birds may refuse to sing unless they are fed cannabis seeds. Occasionally, Dr. Kurowski even prescribes hemp seeds for feather-picking and other nervous symptoms in birds, as the seeds seem to “calm them down.”

Birds are not the only animals that can benefit from the nutritional value of cannabis seeds. Following the radical marijuana-law reforms in Canada in 1998, the Med Marijuana company began research on the potential health benefits of hemp products, and created a liquid health supplement for pets made from cannabis-seed oil called Canna-Pets. According to Med Marijuana spokesman Terry Collier, one teaspoon of the supplement per day in a dog’s food will positively affect their coats, joint problems or arthritis, and even give older pets a renewed playfulness.

“When you look at all the nutrients in a cannabis seed, it’s just amazing,” says Collier. “There are three substances that occur in nature that can support human or mammal life: One is mothers’ milk, another is the coconut, and the third is the cannabis seed.”

When asked if Canna-Pets was legal in the U.S., Collier hesitated. “Legal is not really the right term to use,” he replies. “It’s not illegal.” He explains that they’d gotten heat from the U.S. government when they tried to take a shipment across the border, but that was only because of the content labels. Though Canna-Pets is presently unavailable in the U.S., Collier assures us that they’re working to change that.

Another study done in 1986 suggests that some animals may show withdrawal symptoms. In it, Rhesus monkeys were trained to press levers for food while receiving a continuous infusion of THC. When the scientists stopped providing the THC, the monkeys showed a marked decrease in their responses.

Okay, so you’ve gone ahead and gotten your pet stoned. How do you know if your pet is too high? There are a few symptoms to look for. The most common sign is ataxia, which is a fancy word for stumbling—or, more accurately, loss of muscle control. Because they have no awareness of what the effects of the drug are, or even that they are on a drug at all, animals can’t take the proper precautions against its natural dangers—for instance, going slowly down stairs (when animals lose muscle control, stairs can be exceptionally dangerous).

Another telltale sign is depression—though the symptoms in animal depression may be a little different than in humans.

“When we say ‘depression,’ we basically mean that the dog looks like it’s asleep,” says Dr. Hansen. “They may appear weak, disoriented, reluctant to move, difficult to rouse.” Other symptoms include vomiting, dribbling urine, slow heart rate and vocalization. In those rare or extreme cases where a pet owner (who may be high himself or herself) seriously overestimates how much pot they can give to Spot, an overdose can even lead to seizures and coma.

“If enough cannabis is ingested that the animal appears comatose, you should be very concerned,” warns Dr. Hansen.

An overdose may occur even when you’re not there—i.e., when your pet noses its way into your stash and eats it. All of it. This is typical of dogs, who are known to “eat first and ask questions later,” but it can also be seen in cats and ferrets (who have similar eating habits to dogs). Dr. Hansen says that it’s not uncommon for dogs to eat an entire bag of marijuana, plastic bag and all. Dr. Kurowski says she’s even seen cases where dogs have eaten entire bottles of aspirin, including the bottle. Once a dog finds something with an interesting or unique smell—be it a joint, baggie or even a whole plant—they might just gobble it up.

If your dog or cat does manga all your ganja, it’s important to seek medical treatment. Depending on the time passed since ingestion, the treatments will vary. In the first hour, vets can either pump the pet’s stomach or induce vomiting. After an hour, most of the toxins have already been absorbed into its system, so vomiting becomes useless. In these cases, vets use activated charcoal—the same treatment used on humans for drug overdoses or poisonings. The activated charcoal solution thoroughly cleanses the system. If the animal’s heart and respiratory rates have slowed, IV fluids are given to the animal until they stabilize. But in most cases, there’s little need to worry— there are no reports of permanent symptoms after treatment for such overdoses.

“Usually it’s not a big deal,” Dr. Kurowski reassures us. “They just need time to metabolize the drug. As long as you seek treatment, they’ll be okay.”

Being honest with your vet about what your pet ate is very important. Vets have seen cases of animals ingesting far more harmful (and more illegal) substances than marijuana, so don’t let your paranoia of getting busted interfere with your pet’s well-being. “We’re here to treat the animals,” Dr. Kurowski says. “We’re not here to turn anybody in.”

When all is said and done, the issue of whether or not to give your pets pot is not a scientific but an ethical one. While the clinical effects of low doses of THC aren’t very alarming, you should really stop and think about what is best for your pet. Like people, some animals may enjoy being stoned and some may not. But unlike people, animals don’t have the power to “just say no” or stop if they don’t like it. So before you get your kitty crooked on chronic, ask yourself this: Am I doing this for his/her enjoyment, or for mine?

The post From the Archives: Pets on Pot (2007) appeared first on High Times.