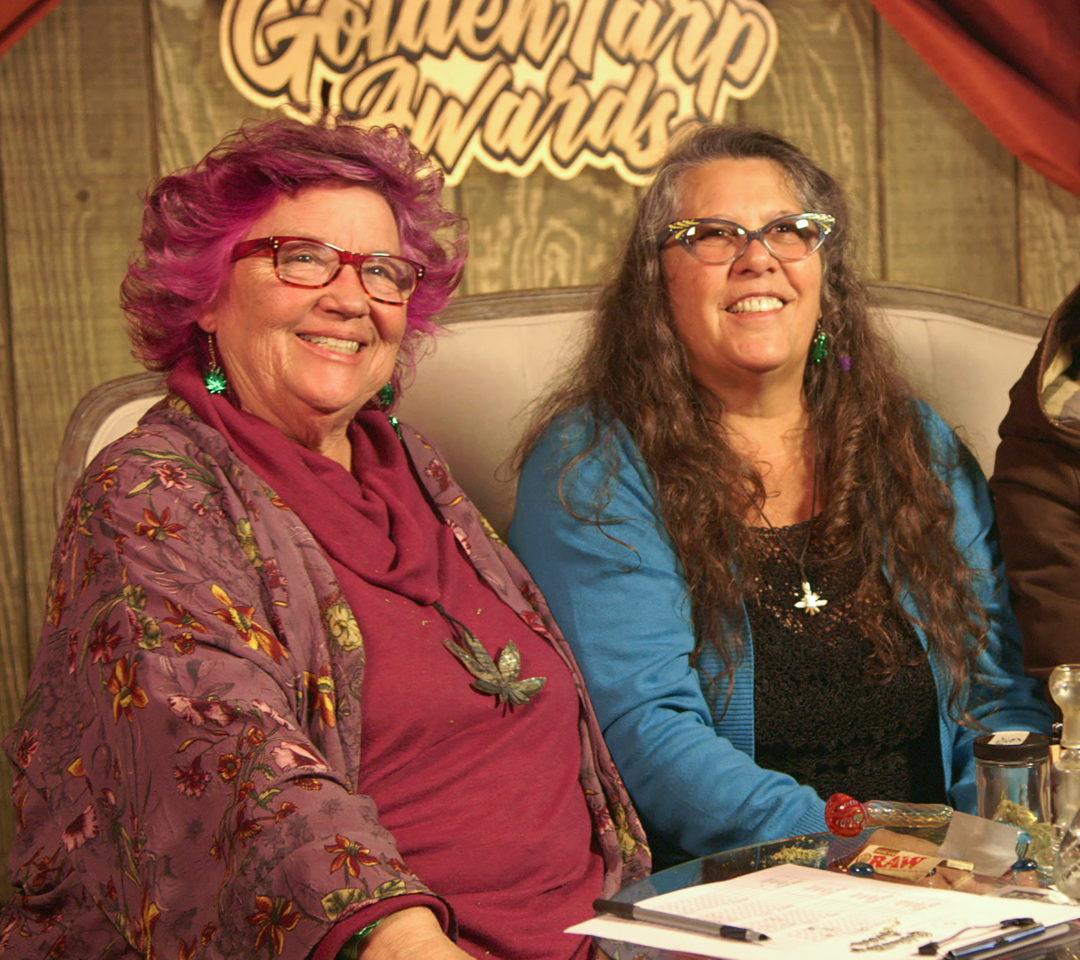 The cannabis industry has heavily benefitted from niche documentaries, which present a professional way to educate viewers about the stigma of cannabis, its history on the War on Drugs or its effectiveness as a medicine. Films such as WEED (2013), featuring CNN’s Chief Medical Correspondent Sanjay Gupta, who opened up the conversation about medical cannabis to the nation. Weed the People (2018) explores the effectiveness of medical cannabis for children. Grass is Greener (2019) examines the history of music and its depiction of the War on Drugs.

Now it’s time to enjoy a new cinematic adventure in the form of Lady Buds—a unique perspective about female cannabis business owners from all walks of life.

Lady Buds recounts the lives and businesses of a diverse cast of individuals in Northern California, varying in race, age and sexual orientation. Seven women, who represent six cannabis businesses, are featured in Lady Buds: Sue Taylor, Chiah Rodriques, Felicia Carbajal, Karyn Wagner and The Bud Sisters (Pearl Moon and Dr. Joyce Centofanti). From cultivation to dispensary ownership and topical creation, these women all faced numerous challenges during the 2017-2019 window when the documentary was filmed. Lady Buds presents an intimate look at the lives of each subject, but also challenges the stereotypes both of “stoners” in general, as well as those of women in the industry.

Check out this exclusive clip from the film, featuring Karyn Wagner who shares an experience that her business ran into shortly after legalization in California went live. Enjoy this sneak peek!

High Times conducted an exclusive interview with Director, Producer and Writer Chris J. Russo in the High Times’ November Issue, aka the Women’s Issue, where she offered an inside look at her film and what kind of experience it presents to audiences. According to Russo, Lady Buds is the first of its kind—and it all began with a statistic about women in the industry that stuck with her. A few key studies have produced some shocking data about women in the industry, or lack thereof.

Back in 2015, according to a study conducted by Marijuana Business Daily (MBD), 36 percent of women held executive roles in the industry. By 2017, that percentage dropped by 26.9 percent, and then increased back up to 36.8 percent by 2019. MBD’s 2021 report entitled “Women & Minorities in the Cannabis Industry” shows a continued decline both in women, as well as people of color.

Lady Buds illuminates the issues that women face in this industry, but also highlights the challenges of all small cannabis businesses fighting to compete with larger cannabis corporations. “This film is kind of nothing like you’ve ever seen before because there hasn’t ever really been a film that’s showed such a wide range of areas that’s just like seeing it through a female lens,” Russo told High Times. “In my film, you explore the challenges of the entire supply chain with the women who are directly engaged in it. I like to make films that I want to see, so I want see more women in the positions of power in roles that are very positive.”

If you live near Los Angeles or San Francisco, check out the following live theatrical events:

The film will be releasing in select theaters on November 26, and will also be available on video on demand services such as iTunes.

The cannabis industry is flourishing at an exponential rate, and although it seemed like a market that was particularly friendly and open to the idea of women in leadership positions, the number of ladies in senior roles isn’t growing as expected.

According to a recent survey conducted by Vangst, a cannabis career recruitment agency based out of California and operating in North America, nearly 17.6 percent of director or executive roles in the industry were held by women. This was out of 166 companies observed across 17 different states. Out of all the companies on the survey bill, 12.6% do not have any women in leadership, while 41.2 have only one.

Recent statistics from Catalyst state that in North America, women hold 31% of senior management roles. Much higher than in the cannabis and hemp industries. This can seem a bit discouraging, but the industry will continue to become more inclusive over time, we just have to keep pushing it in the right direction.

Cannabis and Hemp – A
Look at The Numbers

A report from Arcview Group and BDS Analytics released in January estimates the global cannabis market will hit  $42.7 billion by 2024. ““The legal cannabis market grew by 46% in 2019 despite challenges caused by overregulation and overtaxing in the two biggest markets; California and Canada,” said Troy Dayton, Founder and Chief Strategy Officer of The Arcview Group.

“That is a true testament to just how popular cannabis is among consumers and the ongoing impact of new markets coming online and maturing. The possibilities are boundless as political progress opens up more markets across the world, and struggling markets sort out their regulatory framework,” he added.

Just the hemp market
alone is expected to reach over $20
billion by that time. The cannabinoid industry as a whole is currently the
fastest growing industry in North America, and this will soon be true for many
other countries as well.

There are few key factors driving this significant growth. Legalization of both hemp and cannabis cultivation, functional properties of cannabis and hemp seed and oil, growing use in different food applications, and increase number of chronic diseases,” are among the reasons.

The percentage of women in executive positions varied depending on their sector, however, even most of the niches with the least amount of gender diversity still have significantly more women in higher-level jobs than the U.S. average.

CBD for Women: Why Is It so Beneficial?

According to Cassandra
Farmington, co-founder of Marijuana Business Daily and
former Citigroup employee, “I hit that glass ceiling at 100 miles an hour.
There’s no question this is a huge area for entrepreneurship, and there are so
many women fed up with the corporate arena who find cannabis more appealing.”

Similar to Farrington,
many of the female cannabis executives and business owners already have
considerable experience at banks, law firms, insurance agencies, hedge funds,
consultancies, and other highly-regulated industries so they are well-aware of
what’s required to deal with all the regulations and bureaucracy.

“I just got up one
morning and read all the Colorado rules,” commented Peggy Moore, who spent 33
years working for United Health Group before becoming the CEO of Love’s Oven, a successful
Denver-based cannabis bakery. “After dealing with all of the insurance
industry’s regulations, it wasn’t that complicated.”

While
this is definitely promising news, it doesn’t mean that sexism and misogyny is
non-existent in the cannabis industry. This is what Sabrina Ramkellawan President at
Clinical Research Association of Canada and Cannabis educator at The Michener
Institute of Education at UHN, had to say on the subject.

“The cannabis industry
is definitely a boy’s club. A lot of cannabis companies try to make it look
like they have women so they’ll have one on the board. But there’s still not
enough women CEOs and other executive levels. It makes it challenging as a
woman to work. I find the focus is on today—how do we make money today and
tomorrow? There’s no long-term vision.”

“It’s not the easiest
thing. Your voice isn’t heard sometimes. You don’t really feel part of the
team. You have to push yourself a lot as a consultant. For research, you have
to think long term. I find that some guys are different in the workplace.They
talk about how amazing they are all the time. Me, I’m more honest about what I
can and can’t do. I deliver, but it’s realistic. Whereas I’ve worked with guys
who talk up a lot and don’t do anything. How do these people get these roles?”
she continued in an interview with Leafly.

So technically, this is a 3-for-1, but the first place in our list belongs to the brilliant Knox women: Janice and her 2 daughters, Jessica and Rachel. Together (along with husband/father David Knox), these women became some of the leading cannabis industry physicians. The Knox family founded the ADVENT Academy as well as The American Cannabinoid Clinics. They also own a family medical practice and operate the ABBI medical cannabis chatbot.

These women have dedicated their lives to the medical cannabis
industry, at a time when the industry needs both reliable doctors and more
women. Not only do they offer numerous resources to patients in need, they also
train other medical professionals who need to learn more about cannabinoid-based
therapies.

At her lowest ebb, after moving to a women’s refuge to escape an abusive relationship, Brandi Leifso found the inner strength to launch a beauty CBD business, Evio Beauty. This set in motion a chain of events which resulted in her business being courted, and then purchased, by Canadian cannabis giant Aurora.

Brandi Leifso says: “I was given a shared room decorated with women’s rights riot posters from the 1960s and ’70s, and my own list of chores. I was exhausted and an emotional wreck, but I didn’t let anyone know. While I was in the shelter, I needed something to distract me from my situation. I had daydreamed many times about starting a makeup line, and now I had the time and space to focus on it.”

“I had no experience in running a business, but I didn’t let that stop me,” she continued. “From the shelter, on my laptop, I watched Photoshop tutorials on YouTube and learned the basics of web design. Then I put my new skills to work. I built a website and created a catalog of products featuring lip glosses, bronzers and lipsticks by downloading stock images and photoshopping my brand name, ‘Karmaface’ (old business name) onto them.”

She made the best of a troubling situation and propelled herself into a position of  authority and success in the cannabis industry.

Charlotte Hanna is the founder of Community Growth Partners, a company that offers benefits to those who were directly and negatively impacted by cannabis criminalization. Hanna’s company allows these people to be employed in the now legal, and financially lucrative industry they were once shunned from.

After years of working at
Goldman Sachs, Hanna witnessed the effects – both good and bad – that power and
money can have on the world, which is what pushed her to the sector of advocacy
and activism.

“I have developed my own
opinion about how capitalism can be used as a force for the greater good.
People have lost faith in the institutions and many of us
are increasingly expecting companies in the private sector to help
solve social problems,” says Hanna.

She was inspired by San
Francisco AIDS activist Ruth Brinker, with whom she worked on various projects
to help the homeless population. “She didn’t let anything stop her
from actualizing her dreams,” said Hanna about Brinker. “And sometimes
they were big ideas that seemed unattainable. When I asked her how
she did it, she told me if you can reinvent yourself, you can transform
any situation.”

Do you know any amazing
women making it in the cannabis industry? Are you one of these women yourself?
If either of these statements ring true, then we’d love to hear from you to set
up an interview! Contact me directly at alexandra@cbdtesters.co.

Also, make sure to subscribe to the CBD Business Weekly Newsletter to stay up to date on all things cannabis-related.

The post Women in Cannabis: The Struggles, The Successes, and Beyond appeared first on CBD Testers.