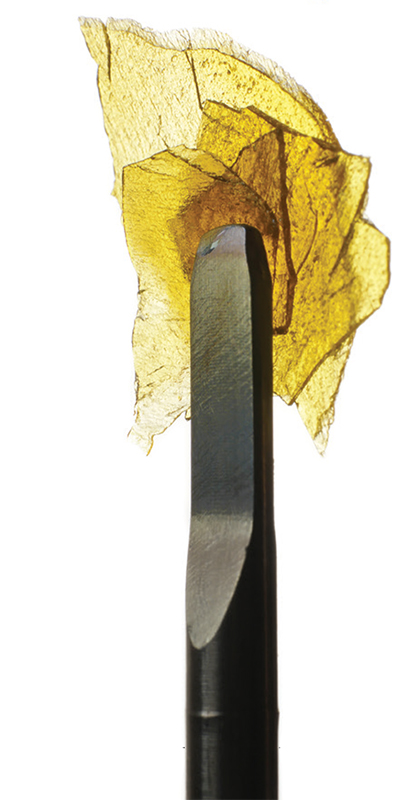 A dab is always a cannabis concentrate – a form of marijuana that has been processed so that much of the plant material has been removed, leaving a substance that will be more potent because it’s now concentrated.

Products made with water, ice, shaking or any combination of methods that don’t involve additional chemicals are considered “non-solvent” or “solventless” and if the quality and technique is right, these can be quite dabbable. Most often, dabs refer to Butane Hash Oil (Butane Honey Oil or BHO) which is made by using butane as a solvent to strip the plant material. The butane/hash mixture is then processed to purge away the butane, leaving a dabbable concentrate. Extractors also use things like CO2 and propane to make concentrated cannabis. With so many different methods,  it’s important to inquire about how the dab was made, as one experience can be completely different from the next!

There are all sorts of devices that people utilize to dab but in essence it’s just fancy hot-knifing – an old technique used to smoke hash by pressing it between two hot knives and inhaling. These days, equipment is much more sophisticated than knives heated over a stove. Glass pipes known as “rigs” are made specifically for consuming hash oil. Rigs have a “nail” – a titanium, glass, quartz or ceramic surface that’s heated with a blowtorch or electric heating device to a temperature that vaporizes the hash upon contact.

It’s important to use discretion with dabbing. Depending on methods and materials, each dab is a unique combination of factors. Just like with different strains of flowers, quality varies. For example, there’s high quality artisan oil made from the flowers of the plant as well as more mass-produced oil made from trim or the entire plant. There are small batches being made at home with PVC pipe and cans of butane and there are batches being processed through industrial closed-loop systems made specifically for this process.

As with many aspects of cannabis usage, there have not been many studies done on the effect of dabs, but since there is an extra solvent in the equation it would make sense to be extra careful about what you’re using. Ideal BHO won’t be green or soupy-goopy and it definitely shouldn’t spark or crackle when it hits the nail. That would be a sign of moisture and there shouldn’t be any in a product that requires such attention to detail. Always start off with a small sample and don’t be afraid to ask questions.

Find a comfortable spot and sit down. In rare cases, dabs can cause fainting – especially in inexperienced users. While cannabis isn’t dangerous, falling down can be. Until you know how concentrates affect you, it’s better to be safe and comfy.

Start small! Cannabis concentrates are strong and a good starter size is about the head of a pin. Even if you smoke flowers daily, dabs will take you to a whole new level very fast! Start small – you can always take a second dab if you want.

Because dabs are highly concentrated, it’s unnecessary to hold your breath to maximize the hit like you might with traditional pot smoke.

Dab cough is real and nothing to be ashamed of – especially with higher temperatures and bigger dabs. The cough is a normal part of dabbing. When the dab expands in your lungs it can be irritating but it can be eased by taking a small inhale of fresh air before inhaling the dab. Dabs will also be smoother if the nail is allowed to cool slightly before puffing. Dabs taken off of a red-hot nail are less flavorful and harsher to inhale.

Dabs can be quite intense and, like all cannabis, they affect each user differently. Variables can include anything from how much sleep you got last night to what you ate prior to toking. If you find yourself uncomfortably stoned have a sugary drink, which will lessen the high.

Errl: Slang for any type of hash oil.

Wax: Named for its earwax like consistency, wax is a form of BHO that is golden, crumbly and not sticky.

Shatter: A form of BHO that is transparent and hard, that literally shatters when broken or snapped.

Non-Solvent: Hash that has been made without the use of solvents. Sometimes this hash is dabbable, especially if using rosin tech.

Rosin Tech: The process of making dabbable hash oil by adding only heat and pressure to solventless hash or marijuana flowers.

Slab: A large quantity of hash oil in one large piece.

Pre-run: A term for marijuana flowers, implying that they have not yet been turned into hash oil and are therefore less desirable.

Nug Run: Hash oil that has been made with only the flowers of the marijuana plant, rather than the trim or the full plant.

Blasting: The process of running solvent through plant material to create hash oil.

E-Nail: A device that heats and controls the temperature of the nail so that no blowtorch is needed and the nail does not have to be reheated between each dab.

Reclaim: The resin left behind in a rig. Unlike resin from bowls and bongs, reclaim doesn’t smell awful and is actually quite potent.

DTFO: Stands for Dabbed The F*** Out, used to describe someone who is falling asleep or similarly unable to handle the dabs they took.

Baby Dab: A small dab, a good idea for those who have never tried it or rarely do.

Ninja Dab: When someone sneaks in a dab on top of the one being taken, forcing the dabber to do the double dab.

The post Dabbing 101: A Beginner’s Guide to Concentrates appeared first on Cannabis Now.

There’s nothing wrong with wanting things on the more natural side. More and more nowadays, people are starting to stray from tobacco-based products due to the complications they’ve been known to bring. While smoking anything, arguably, isn’t great for the lungs, there are various cleaner alternatives that your body will definitely appreciate much more.  Today, […]

There are a handful of different ways you can choose to consume your cannabis. To help you choose, here’s a guide to the basic cannabis consumption methods. Cannabis Consumption via Smoking Smoking is easily the most well-known and most common method for cannabis consumption. Smoking cannabis involves lighting the actual cannabis flower and inhaling the […]

Today’s weed Wordsearch is all about celebrating the inhalation of cannabis. For those of us who like to vape, toke, smoke, blaze, dab, hit it, and quit it, this Wordsearch is for you! Words to the wise Sure, this may look easy but you will be surprised. There are no words spelled backward but you […]

So, you are ready for smoking weed the first time. Maybe you’re with a group of friends who will teach you the ropes…or maybe you’re alone and want to give it a go. Check out these 8 educational cannabis videos! All of them are short and easy to follow but, more than anything, they will […]