The first 150 residents get Joints for Jabs.
California just signed a cannabis overhaul bill, but not everyone is happy about it.
Drones may be used soon to track down illicit California grows, with federal backing.
Wildfires are picking up in California and threatening cannabis crops, thanks to a mix of lightning and dry conditions.

Activist and entrepreneur Evan Nison speaks with hosts Jordan Wellington and Andrew Livingston about how their home state of New Jersey as well as New York as legalizing marijuana, as well as some of the work he’s done and is doing through his PR company NisonCo. Produced by Shea Gunther. 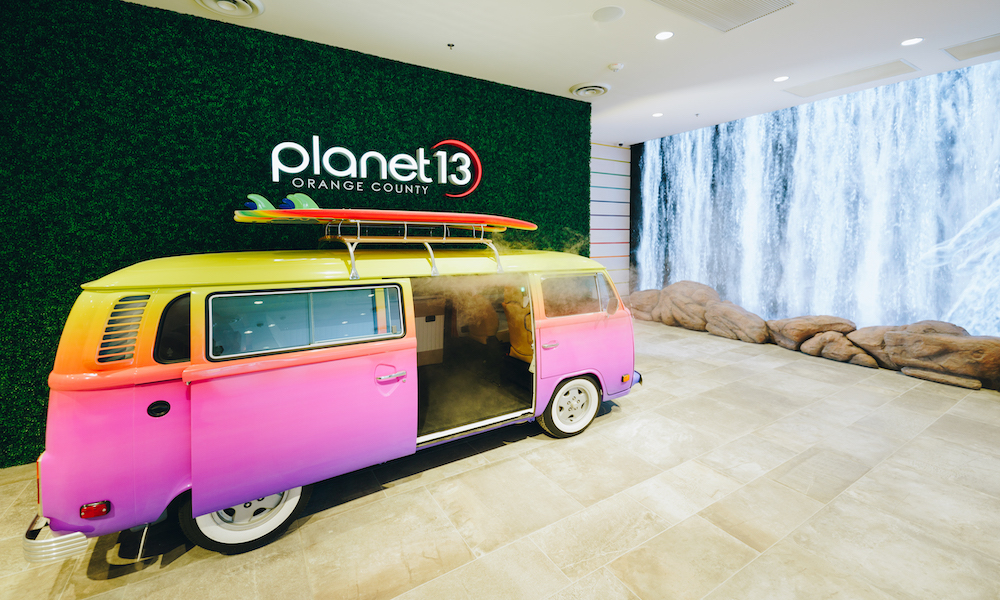 Southern California residents have a new option for purchasing legal marijuana with the opening of the Planet 13 cannabis superstore in Santa Ana this week. The licensed dispensary, Planet 13’s third retail outlet and the first in the Golden State, opens its doors to customers 21 and older beginning on July 1.

“We are thrilled to be bringing our industry-leading retail experience to cannabis consumers in Southern California. The Planet 13 brand is synonymous with exceptional customer experience with a focus on extensive product selection, unique entertainment features, and world class customer service. Our Orange County SuperStore is designed to encompass all of the above,” Bob Groesbeck, co-CEO of Planet 13, said on June 24 in a press release from the company. “Orange County is home to 3 million people and has another 50 million visitors each year — making it a massive opportunity for consumer-focused cannabis brands. P13 OC is modelled after our extremely successful Las Vegas superstore, and with today’s announcement we look forward to offering consumers the Planet 13 retail experience, blended into the fabric of California.”

Although it takes its cues from the original Planet 13 location, the Santa Ana store is a California original. At the entryway to the new cannabis dispensary, a “hot-boxed” VW bus wafts artificial smoke, seemingly beckoning visitors inside for a quick selfie before the shopping commences. After a quick ID check, customers step across an interactive, digitally projected beach, leaving virtual footprints in the sand to be washed away by the next CGI wave. A shimmering waterfall, also a digital projection, parts over an archway that leads patrons to the retail salesfloor, which encompasses 16,500 square feet and displays wares from dozens of California licensed cannabis brands.

Future construction phases planned for the Planet 13 Santa Ana location will include cannabis memorabilia and ancillary retail sales areas, as well as a cannabis consumption lounge to be opened when local regulations permit the operation of such facilities. Cannabis product manufacturing facilities offering visitors a view of the production processes are also planned, according to Groesbeck. When complete, the entire facility is expected to boast a total footprint of 55,000 square feet, which Planet 13 is characterizing as California’s largest cannabis dispensary complex. The company is also billing the Santa Ana store as the world’s second-largest dispensary overall, placing behind the Planet 13 flagship location in Nevada, just minutes from the Las Vegas Strip.

At an opening celebration for the media and cannabis industry VIPs held at the new dispensary last week, Santa Ana Mayor Vicente Sarmiento said that the regulated cannabis industry represents new economic opportunities for the city he serves, the only jurisdiction in Orange County to permit retail dispensaries so far. On Saturday, July 26, Santa Ana saw the opening of a new dispensary from Cookies, the multistate brand co-founded by rapper and cannabis mogul Berner. The neighboring city of Costa Mesa is expected to begin taking applications for cannabis retailers later this summer, according to media reports.

Groesbeck agreed with Sarmiento, telling Cannabis Now that tax revenue generated by the dispensary will help fund essential city services while providing hundreds of new jobs for the community.

“It’s going to provide money to go into the public coffers to distribute to parks, schools, libraries, whatever the case may be, but it also is a big job creator,” Groesbeck said in an interview. “We’re opening the doors here and I think we’re close to 225 or 250 employees to start. And that’s only going to increase as we start expanding. And these are good jobs. This isn’t minimum wage stuff. These are really solid jobs. I think our starting wage down here for hourly employees is 15 bucks.”

Groesbeck added that the company was hiring for positions including “everything from the support services and facilities maintenance all the way up to GM’s, of course. And primarily, everyone is hired to provide a great customer experience: budtenders, support staff of the budtenders, the queueing folks to check people in, and everything that’s associated with providing a great customer service.”

Besides providing steady, good-paying jobs, Groesbeck said the Planet 13’s business philosophy encourages promotion from within, giving the company’s workers the opportunity to create an entire career for themselves.

“People that work hard, put the time in, and dedicate themselves to the company, the mission, and our customers –  they’re going to move up. One day someone will succeed me and Larry,” he said referring to Planet 13 co-CEO Larry Scheffler. “Somebody in this crowd could be the CEO. That’s what we want.”

Planet 13’s new California location in Santa Ana opens to the public on July 1, with a grand opening celebration kicking off at 10 a.m. PDT.

EVIDENCE is a new cannabis brand that’s not only growing weed in a prison, but is also dedicated to social justice, donating $1 from every sale to helping free those who are serving time for weed-related charges.
A $100 million package aims to aid marijuana businesses in the state of California.
Cat Packers has been working toward equity in Los Angeles’ cannabis industry for many years.
In an aim to prop up the state’s still-struggling, legal cannabis industry, lawmakers in California on Monday approved…
More User Photos…