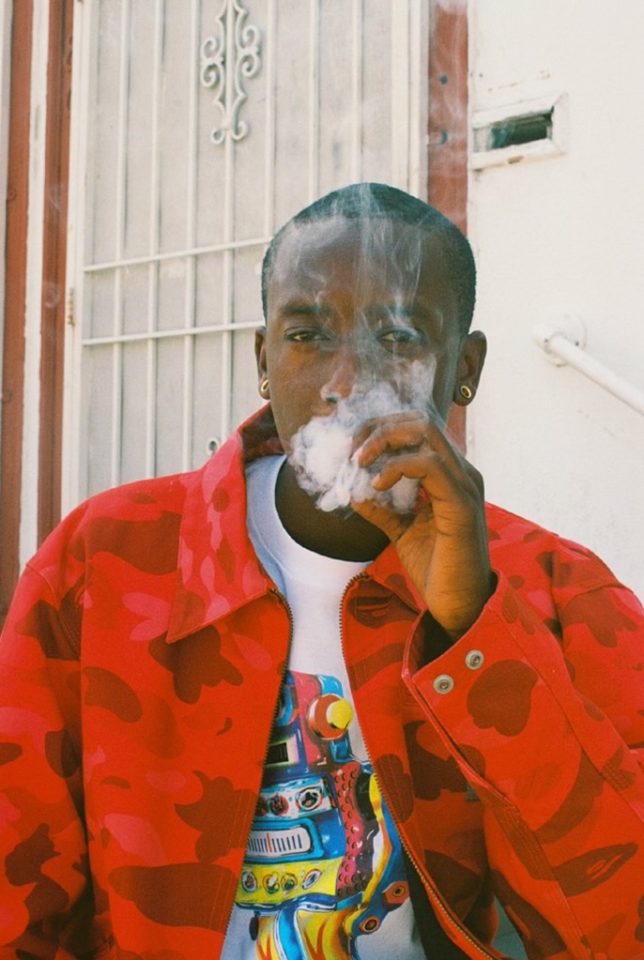 Buddy is one of L.A.’s finest up-and-coming musicians—a rapper-singer hybrid with a knack for creating hooks that immediately sound timeless. He’s not new to the game, though: At age 15, he got signed to Pharrell’s Star Trak label, collaborated with Kaytranada on an EP in 2017, and put out his first full-length on RCA Records (Harlan & Alondra) shortly after that. Definitely check out his viral NPR Tiny Desk Concert from 2019 as an intro to his special blend of sonic sweetness.

Buddy is 28 now, and he recently dropped his second LP titled Superghetto, featuring appearances from Tinashe, T-Pain, and Blxst. He even performed the single “Wait Too Long” on The Tonight Show with Jimmy Fallon, in which he coolly lounges in an armchair and pretends to chat on a landline before diving into a sexy-ass serenade.

Buddy was born and raised in Compton, and the artist is no stranger to fine West Coast weed. In fact, he says he’s been loyal to the strain Luigi OG, which is only grown by one L.A. farmer, for the last 10 years. “It’s the gas-iest of the gas. It’s that 91 Premium Deluxe,” he told Cash Only during a breezy phone call.

Buddy was generous enough to make some time to talk about his weed preferences, including cutting down on tobacco in his spliffs, his appreciation for Jay-Z’s marijuana brand Monogram, and the benefits of combining weed and yoga. Enjoy!

What’s your favorite weed strain and how do you like to consume it?

Buddy: I’ve had the same favorite weed strain for the last 10 years, Luigi OG. I’m friends with the weed man who runs the company; he has one grower who I’ve never met, but he’s been the same grower for the last 30 years or so. It’s the best weed in L.A. — pure OG Kush. It’s my favorite. I been getting high off that for a decade, maybe even over a decade.

It’s that endo—indoor grown. It’s the way it smells when you break the seal of the packaging. It’s the way it feels as I’m breaking it down with my fingers. It’s the way it smokes after I light it up and take that first hit. It’s how it makes me feel—it gets me so relaxed. I smoke a whole blunt and go to sleep! Wake up and it’ll be the next day. That knockout weed. It’s an indica—all indica. No hybrid or dominant stuff; it’s just indica.

It’s the gas-iest of the gas. It’s that 91 Premium Deluxe. It’s so green, it’s just green. Only green. It’s super fluffy and condensed. I don’t know how it can be so fluffy and condensed at the same time. It’s got the buoyancy, like you know when you pinch a nug and it’s got a little bounce on it? Then you start breaking it down and it just takes forever. You peel it little by little and you can get a big old pile of weed from one condensed nug, and then you can roll it up.

I like using Grabba Leaf, like the fronto leaves, all the way. But lately, I’ve been rolling spliffs. I take some of the Grabba, mix it with the weed, and roll it in some papers because I’ve been trying to wean myself away from tobacco so I can just be high on the weed. I’m on that tobacco-free journey, one day at a time, one spliff at a time.

Do you have a current favorite weed product?

I just got put on to the Jay-Z weed, the Monogram stuff. That weed is cool. I like how they package those pre-rolled joints. There are little magnets on the black box and it comes with four pre-rolled joints in little tubes. It looks so chic. I’m really impressed by the packaging. It’s elegant—like a higher hierarchy of marijuana, a “higher-archy.” The actual weed isn’t my favorite, but that packaging…

What activity do you like to do after you’ve smoked?

I picked up yoga recently and I be getting super high and then super zen. That combo gets me super chill. A little meditation, some time alone. It’s good for me. All vibes over here.

Can you recommend something to watch while stoned?

I been watching Snowfall lately. It’s on FX but they got it on Hulu. It’s about dealing drugs and cocaine in L.A. They drop episodes every Thursday. The homie Damson [Idris] is the main character Franklin on the show. He’s the kingpin in the hood for real, getting dope from the government, selling it in the hood. There’s a bunch of government conspiracy stuff going on behind the scenes, and then the street shit with the Crips and the Bloods, and the n*gg*s from Compton and Inglewood fighting over the money and drugs. It’s awesome. I be getting high and watching that shit. It was John Singleton’s last project before he passed. It’s my show right now. It be going up.

In the last episode, Franklin’s auntie and uncle got married, and somebody put LSD in the chocolate fountain. So everybody was eating chocolate-covered strawberries and then tripping out! It was a crazy episode and I’m waiting for the next one to see what happened because Franklin’s auntie just called a hit out on somebody they made a truce with. Oh, it’s finna get crazy! I’m trying to get married and have an LSD wedding now. Fuck it, let’s take it there.

Can you recommend something to listen to while smoking?

I’m big on Outkast—ATLiens, Aquemini, Speakerboxxx / The Love Below. I’ll go into an Outkast friends and family wormhole. Aquemini is probably my favorite, but it’s hard to decide.

Can you recommend something to read after getting baked?

I’ve been trying to get through this nifty booklet. It’s hard, though. I’ve been circling back on The Way of the Superior Man by David Deida. It’s a spiritual guide to mastering the challenges of women, work, and sexual desire. It’s a handy guide, a self-help book, for situations that I be in with women and work and sexual desires. It’s helped in my personal life. It’s good to read; it assures thoughts I’ve already had. It confirms thoughts I already be thinking. It’s like wow, I’m not crazy and I’m not wrong.

Who’s in your dream blunt rotation?

Beyonce, no doubt. Me and the Queen B. Jay-Z can come if he wants. We’ll probably be smoking some Monogram out of respect, but I’ll probably mix it with that Luigi OG just so I can get some fire in there and we can spliff it up. We’ll probably just be hanging out, internet shopping, listening to music and stuff. I wanna shop online with Beyonce’s card and smoke weed and watch movies and stuff. It would be a good time.